Among the three different types of join operators used by SQL Server, the HASH JOIN does some of the hardest work. It scales pretty well and is very suitable for parallel processing. As such, it can be very powerful in many applications, but hash joins can potentially consume quite a bit of memory, so seeing on in your query plan could be an indicator of a performance tuning issue in your query or data.

You may recall a previous post on sqlsunday.com that goes through the three different types of joins. The short, executive summary of this article is that there are three types of joins you should know about:

How does a HASH JOIN work?

A hash function is a one-way function that turns a set of data into a hash, like a checksum if you will. This means that there is no way to deterministically reverse a hash function in order to retrieve the original plaintext.

On a side note, a hash function may look like encryption or compression, but it’s not: Encryption and compression are reversible, and the length of an encrypted/compressed text varies with the length of the plaintext. Hash values, however, are generally fixed in length, which implicitly means that multiple plaintexts can generate the same hash values, rendering a hash value non-reversible.

Both encryption, hashing and compression, however, generate values that are very evenly distributed, which is a trait we’re looking for in hash joins.

SQL Server supports a number of different hash functions using the HASHBYTES() function. I’ve provided the following code example to illustrate generally how hashing works, not specifically how SQL Server implements hashing in its joins. The principle, however, is the same. The following example..

Notice how, even though the original texts differ by only a single character, the hash values are completely different. Also, the length of the hash is constant (how long it is depends on which algorithm you use). In this example, we’re using SHA1, which yields a 20 byte hash.

Another thing to remember is that hash functions are always deterministic, which means that the same plaintext will yield the same hash value every time.

As a part of the process of JOIN’ing two sets of data, SQL Server calculates the hash values of all the equijoin columns for both sides.

An equijoin is a join that use the “=” to join a column or expression on the left side with one on the right. In this example, there are two of those going on; the “someColumn” and “intValue” columns. The other join conditions are residual, which means that they’re performed after the equijoin columns have been successfully joined.

The hash values are stored in two hash tables, known as the probe input and the build input. The build input is normally the smaller data set, and is stored in memory. You could think of them as the build input being the “dimension table”, and the probe table as the “fact table”. The records from the build input are evenly distributed in so-called buckets. This effectively partitions the data into much smaller and more manageable chunks that can be matched together.

Remember, because the hash function, and its subsequent assignment to a bucket are deterministic, matching rows will end up in the same bucket in the build table as in the probe table.

In the last step of the join, the buckets of the build table and the probe table are matched together first. After that, the rows in each corresponding bucket are matched to each other. As you remember, two different records can yield the same hash value and bucket; in the second step, SQL Server actually verifies that the records do match as well. 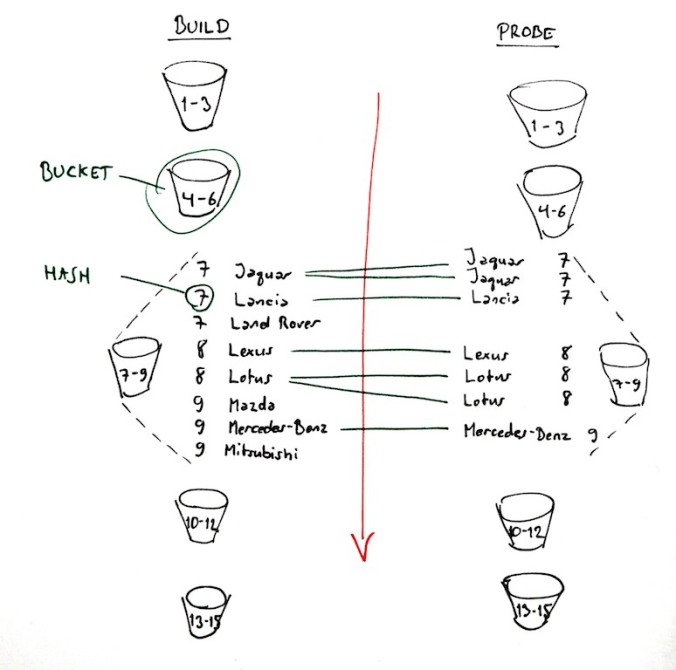 Finally, any residual join conditions are matched. In the example above, this is the “anotherColumn” join, which isn’t an equijoin.

In a graphical query plan, the hash join is shown as a “Hash match” icon, joining two sets of data. The build input, i.e. the smaller of the two tables, will be shown on top of these two, and the probe table below.

Hash joins are performed slightly differently depending on the size of the two inputs and the memory allocated to your query. When SQL Server cannot accurately determine the size of the inputs, it’ll start “optimistically” with an in-memory join, and then gradually migrate to a grace join and finally to a recursive join.

The build input is hashed and stored in memory in buckets. The probe input is processed row-by-row and matched against the build input. In-memory hash joins are possible when the entire build input fits in the query’s allocated memory.

A grace hash join happens when the inputs won’t comfortably fit in the allocated space of memory. The input and probe builds are partitioned, using hash values of the hash values, in a process that could be described as partitioning. The two inputs are then matched first by partition, then by bucket, and finally row-for-row.

The “current” partition being used to match the two inputs is in-memory, whereas the remaining partitions are temporarily stored on disk in what’s known as a spill. This can cause a potentially severe performance penalty.

Sometimes, even a grace hash join can generate partitions that are too large to work with. This can happen if your inputs are very large, or if the buckets are not evenly populated, resulting in some buckets that are too big to use in-memory. In this scenario, SQL Server can dynamically partition the partitions (recursively).

You can force SQL Server to use a hash join, using a join hint:

But as a general rule of thumb, if SQL Server doesn’t suggest a hash join, it probably isn’t the best strategy. I know very few people who’ve ever outsmarted the SQL Server query planner.

How your inputs tables are indexed, datatyped, as well as how your join is written, is key to which type of join SQL Server selects. You can use a join hint to force a certain type of joins.

Again, in 99% of the cases, a bet against the default query plan is a losing strategy. Instead, think about how you can change or add indexes on the input tables, refresh your statistics, split your queries into parts, perhaps using temp tables, etc.

This site uses Akismet to reduce spam. Learn how your comment data is processed.